What is cradle cap? When your baby develops red scaly areas on his scalp, this is known as cradle cap.  Red on to find out!

Your beautiful one-month-old baby has developed scaliness and redness on his scalp. You’re concerned and think maybe you shouldn’t shampoo as usual. You also notice some redness in the creases of his neck and armpits and behind his ears. What is it and what should you do?

When this rash occurs on the scalp alone, it’s known as cradle cap. 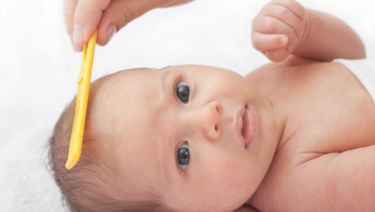 But although it may start as scaling and redness of
the scalp, it also can be found later in the other areas just mentioned. It can extend to the face and diaper area, too, and when it does, pediatricians call it seborrheic dermatitis (because it occurs where there are the greatest number of oil producing sebaceous glands). Seborrheic dermatitis is a noninfectious skin condition that’s very common in infants, usually beginning in the first weeks of life and slowly disappearing over a period of weeks or months. Unlike eczema or contact dermatitis, it’s rarely uncomfortable or itchy.

No one knows for sure the exact cause of this rash. Some doctors have speculated that it may be influenced by the mother’s hormonal changes during pregnancy, which stimulate the infant’s oil glands. This overproduction of oil may have some relationship to the scales and redness of the skin.

How to Treat Your Baby’s Cradle Cap

If your baby’s seborrheic dermatitis is confined to his scalp (and is, therefore, just cradle cap), you can treat it yourself.

Sometimes yeast infections occur on the affected skin, most likely in the crease areas rather than on the scalp. If this occurs, the area will become extremely reddened and quite itchy. In this case, your pediatrician might prescribe a medication such as an anti-yeast cream.

Rest assured that seborrheic dermatitis is not a serious condition, or an infection. Nor is it an allergy to something you’re using, or due to poor hygiene. It will go away without any scars.

The information contained on this Web site should not be used as a substitute for the medical care and advice of your pediatrician. There may be variations in treatment that your pediatrician may recommend based on individual facts and circumstances.
<< Safe Sleep For Baby
Just For New Dads – A Special Message For You! >>