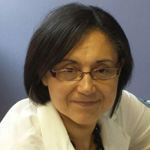 “Partera” or “Comadrona” are the Spanish words used to describe Midwife in Puerto Rico or the Dominican Republic where my family is from. Translated they mean “woman who delivers or co-mother”. These words are used to describe the women who would deliver your baby in the backwoods where there were no doctors. Imagine my surprise when, during my second pregnancy, in a city hospital, I was being cared for by a Midwife. I grilled her about her profession endlessly and finally, instead of finishing my Bachelors in Business Administration, I turned around and started on my journey to a Nursing Degree. I graduated with a Bachelors in Nursing in June of 1989.

Much to my surprise I loved nursing in Labor and Delivery and worked at North Central Bronx Hospital and then at St. Luke’s Roosevelt hospital for nearly 10 years before returning to school and achieving a Certificate in Midwifery in August of 1998. Upon graduation, I returned to St. Luke’s Roosevelt for several years and have been in private practice since 2005.